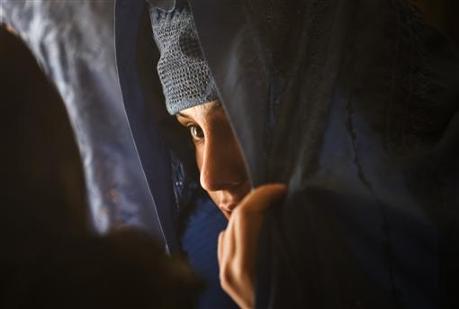 A woman speaks with an election official as she prepares to vote in the Afghan election in Mazar e Sharif in northern Afghanistan August 20, 2009. REUTERS/Caren Firouz

* Congo plagued by rape as weapon of war

* Somalia seen as having full gamut of risks

Pakistan, India and Somalia ranked third, fourth and fifth, respectively, in the global survey of
perceptions of threats ranging from domestic abuse and economic discrimination to female foeticide, genital mutilation and acid attacks.

“In addition, women who do attempt to speak out or take on public roles that challenge   ingrained gender stereotypes of what’s acceptable for women to do or not, such as working as
policewomen or news broadcasters, are often intimidated or killed.”

The poll by TrustLaw, a legal news service run by Thomson Reuters Foundation, marked the launch of its new TrustLaw Women section, a global hub of news and information on women’s legal rights.

TrustLaw asked 213 gender experts from five continents to rank countries by overall  perceptions of danger as well as by six risks. The risks were health threats, sexual violence, non-sexual violence, cultural or religious factors, lack of access to resources and trafficking.

Some experts said the poll showed that subtle dangers such as discrimination that don’t grab headlines are sometimes just as significant risks for women as bombs, bullets, stonings and systematic rape in conflict zones.

“I think you have to look at all the dangers to women, all the risks women and girls face,” said
Elisabeth Roesch, who works on gender-based violence for the International Rescue Committee in Washington.

“If a woman can’t access healthcare because her healthcare isn’t prioritised, that can be a very dangerous situation as well.”

Afghanistan emerged as the most dangerous country for women overall and worst in three of the six risk categories: health, non-sexual violence and lack of access to economic resources.

Respondents cited sky-high maternal mortality rates, limited access to doctors and a near total lack of economic rights. Afghan women have a one in 11 chance of dying in childbirth,
according to UNICEF.

Democratic Republic of Congo (DRC), still reeling from a 1998-2003 war and accompanying humanitarian disaster that killed 5.4 million people, came second mainly due to staggering levels of sexual violence in the lawless east.

More than 400,000 women are raped in the country each year, according to a recent study by U.S. researchers. The United Nations has called Congo the rape capital of the world.

“Statistics from DRC are very revealing on this: ongoing war, use of rape as a weapon,  recruitment of females as soldiers who are also used as sex slaves,” said Clementina  Cantoni, a Pakistan-based aid worker with ECHO, the European Commission’s humanitarian aid department.

“The fact that the government is corrupt and that female rights are very low on the agenda means that there is little or no recourse to justice.”

Rights activists say militia groups and soldiers target all ages, including girls as young as  three and elderly women. They are gang-raped, raped with bayonets and have guns shot into
their vaginas.

Pakistan ranked third largely on the basis of cultural, tribal and religious practices harmful to women. These include acid attacks, child and forced marriage and punishment or retribution by stoning or other physical abuse.

Some 1,000 women and girls die in honour killings annually, according to Pakistan’s Human Rights Commission.

In 2009, India’s then-Home Secretary Madhukar Gupta estimated that 100 million people,  mostly women and girls, were involved in trafficking in India that year.

“The practice is common but lucrative so it goes untouched by government and police,” said Cristi Hegranes, founder of the Global Press institute, which trains women in developing countries to be journalists.

India’s Central Bureau of Investigation estimated that in 2009 about 90 percent of trafficking took place within the country and that there were some 3 million prostitutes, of which
about 40 percent were children.

In addition to sex slavery, other forms of trafficking include forced labour and forced marriage, according to a U.S. State Department report on trafficking in 2010. The report also found slow progress in criminal prosecutions of traffickers.

Up to 50 million girls are thought to be “missing” over the past century due to female infanticide and foeticide, the U.N. Population Fund says.

Some experts said the world’s largest democracy was relatively forthcoming about describing its problems, possibly casting it in a darker light than if other countries were equally
transparent about trafficking.

Somalia ranked fifth due to a catalogue of dangers including high maternal mortality, rape and female genital mutilation, along with limited access to education, healthcare and economic
resources.

“I’m completely surprised because I thought Somalia would be first on the list, not fifth,” Somali women’s minister Maryan Qasim told TrustLaw.

“The most dangerous thing a woman in Somalia can do is to become pregnant. When a woman becomes pregnant her life is 50-50 because there is no antenatal care at all. There are no hospitals, no healthcare, no nothing.

India ranked 4th as world’s most dangerous countries for women

In 2009, India’s then-Home Secretary Madhukar Gupta estimated that 100 million people, mostly women and girls, were involved in trafficking in India that year.

In 2009 it was estimated by India’s Central Bureau of Investigation that about 90 percent of trafficking took place within the country and that there were some 3 million prostitutes, of  which about 40 percent were children.

The 2007 U.S. Trafficking in Persons report identifies that the lack of co-ordinated national action undermines attempts to combat human trafficking.It recommends the urgent necessity to establish an effective national-level body to enforce the law strictly as these problems are made worse by the reported complicity of law enforcement officials in trafficking and related
criminal activity.

As far as female infanticide and foeticide in India is concerned up to 50 million girls are thought to be “missing” over the past century due to female infanticide and foeticide according to the U.N. Population Fund.According to the report this problem is creating gender imbalances and other serious problems that experts say will have far reaching consequences for years to come.

Experts in India who have analyzed the National Family Health Survey 2 (NFHS2) estimate that about 300,000 girls go “missing” in India each year. Other studies have put the number between 150,000 and 500,000.

Apart from India, Afghanistan has been placed as the world’s most dangerous country for women and Congo has been placed second due to the horrific levels of rape dominant there. Pakistan grabbed the third place for its increasing domestic abuse and economic  discrimination and Somalia ranked fifth respectively due to its genital mutilation and acid attacks.

But if India wants to make its country worth living for women it will need to  cover lot of  aspects as far as security is concern. According to police  records, over 400 rape cases have been reported in the capital in the year 2010  alone. According to the data, 18,359 rape cases were registered in India in the  first three quarters of this 2010; hence, we need to provide an environment of  safety and security to our women with strict implementation of the female
centric laws that’s in theory in our books. 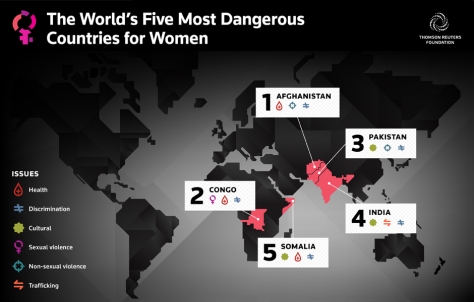 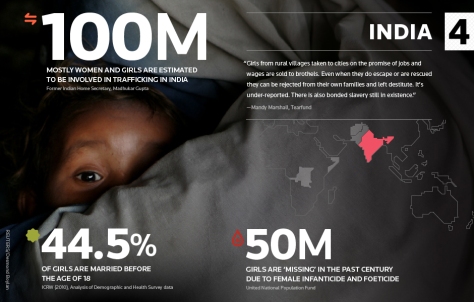