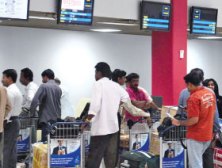 I have read your article titled Fearing axe, expats leaving for good? In the Times of Oman – June 20, 2011. The article is reproduced below for others to read in case they missed it! Frankly your article came at the right moment and what you say is disturbing and emotive – because I can feel for them having myself worked in HR Human Resources and where the decision to renew some contracts or not remain undecided – even to some cases coming after the contracts have already expired – and in some cases even after one month too! And then the abrupt and raw treatment too after you in HR keep asking the Department Heads and Managers saying to you – give him one month notice of not renewing the contract and one salary in lieu.

Most of the victims are usually in the middle and lower echelons – and sad to say are usually Regional Staff – namely Indians, Pakistanis, Filipinos etc – and not from The Western World where treatment is either better or know how to fight for their rights and in the contracts making – where generally speaking here need to be given at least three months notice or salary in lieu if not going to be renewed – unalike his Regional colleague which is generally and normally speaking is one month unless is in the top cadres and echelons.

I do not want to blow my trumpet but you can ask people who know me where I had fought my various Management to treat staff decently, professionally equitably and ethically because they ‘too hurt and bleed’ – and blood is after all red for all human beings disregard race, creed, nationality or colour! I met a lot of resistance and unfortunately and sadly from fellow Omanis that had taken over from the same style of their Western compatriots! Reminds one of Animal Farm by George Orwell.

The Indian worker has too a family and children going to school – and possibly loans too from the bank. Remember the article – Fleeing Dubai – Hasni Essa – January 14 2009? (See A Cry For Help! book) My career suffered a beating because of my stand – but I look at the greater picture of My God here more than just career progression and development.

My Omani peers used to mock me – why fight for Indians? They are always against us and they gave us very hard and difficult times when we Omani graduates came in by the ‘lies and fibs’ they told their Western bosses. If you have the time please read my books especially the Management ones A Cry For Help! and Psychology of Arab Management Thinking! – http://www.majidbooks.com – very telling and informative!

It is neither fair nor ethical to generalise but the Filipino Staff are more compliant compassionate and understanding in training and in teaching especially the young Omanis – unalike their Indian and Pakistani peers. Also in guidance, mentoring and coaching aspects. They are also practical and realistic – because they know they are here for a temporary time and contract – and will have to hand over and give a chance to the young Omanis.

A worst case scenario was reached in my last oil company where there were literal in-fights between the two communities (Indians and Filipinos mainly) – especially in the Interior desert locations. The issue was why the Filipinos (teased as dog-eaters!) were more friendlier to the young Omanis than the Indians were. Frankly there are bad fish (and eggs) in each basket but what the Indians generally forget that Omanis have elephant memories of how they were treated when they joined the Company.

These same young Omanis became future bosses of the (again generally speaking) Indians previous bosses. It is mad world out there – the laws of the jungle. Like I always say – people – apart from family – behave worst in the work environment – and thus my need to write a second column titled At My Workplace. Apart from The Oman Daily Observer, the other English dailies ignored me completely – despite all the things that have recently happened in our country! The Indian and Regional Staff continue to be discriminated – an example is holding their passports.

But I want to pose a question to you, if I may? Over 86% of the General Managers and Managing Directors in Oman are from India. Why do they not revoke this rule? Surely they can over ride the Omani HR Managers – as they do in many decisions – even in training, recruitment etc. I could understand this situation if it was the Omani or Western MD doing this. A point to ponder for you. Tip – ask the Indian labourers who fly home Air India!

This is a most ridiculous statement full of bias and innuendos – sorry! “I really hope this is not a universal trend. We still need experienced expatriates in Oman. If they go in large numbers then the productivity of many companies would nosedive,” Qais Al Abry, the proprietor of Ghubra Heavy Lifting, told Times of Oman. “I don’t think we should be in a hurry to replace them yet. It is the junior positions that we must Omanise to create jobs for the nationals. I hope the government makes a distinction between the two levels of employment,” he added.

Why are Omanis designated only for lower end jobs? Why? Another point to ponder for you!

Having said all that I fully agree with you in all the other aspects. I thank you for ethically and professionally bringing out such issues in the open. I also like your defence of the under dog – the poor Indian etc outside casual labourer and worker and how they are treated.

This is my advice. Ensure you fight your rights like the European and USA Staff to insist of at least three months notice period – and if the date is crossed it is ‘presumed to have been automatically to be renewed’ per se. Do not expose yourself to unnecessary tensions and depressions. Yes we all need to work – but our health and well-being are far more important.