Palestinian president Mahmud Abbas made history in his people’s long quest for statehood asking the UN to admit Palestine as a member state, stirring US and Israeli anger. Abbas handed UN Secretary-General Ban Ki-moon a letter requesting full UN membership, which the Security Council will discuss on Monday. The United States has vowed to support its Israeli ally and use its veto if a vote is held.“I do not believe that anyone with a shred of conscience can reject our application … and our admission as an independent state,” Abbas told the UN General Assembly in an impassioned speech that won a standing ovation even as Israeli and U.S. delegates looked on stone-faced.

Trying to head off a clash in the Security Council, a quartet of Middle East mediators urged a return to peace talks within four weeks, “substantial progress” within six months and an agreement to be struck within a year. 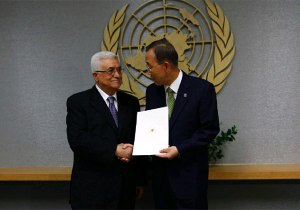 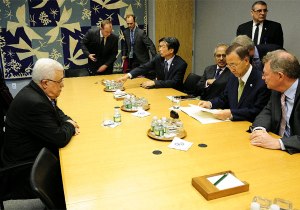 Highlighting the divisions in the Palestinian camp, Hamas, rejected Abbas’ move as “begging” for statehood. “States are not built upon UN resolutions. States liberate their land and establish their entities,” said Hamas leader Ismail Haniyeh.

The Quartet — the United States, Russia, the European Union and the United Nations — asked Israel and the Palestinians to submit proposals on territory and security within three months.

“The Quartet proposal represents the firm conviction of the international community that a just and lasting peace can only come through negotiations,” US Secretary of State Hillary Clinton said, urging both sides to seize the chance to talk.

Former British Prime Minister Tony Blair, the Quartet’s special envoy,said the major powers believed they were closing in on guidelines that both sides could accept.

But previous proposed timetables for negotiations, such as a one-year deadline set by former U.S. President George W. Bush in 2007 and one by Obama a year ago, have run into the sand.

In their speeches, Abbas and Netanyahu both said they extended their hands to the other party, but each blamed their opponents for the failure of past peace efforts.

“We cannot achieve peace through UN resolutions,” Netanyahu said, demanding that the Palestinians recognize Israel as the Jewish state, something they reject because they say that would prejudice the rights of Palestinian
refugees.

The Palestinians say they will give the Security Council “some time” to consider their request, but if that fails may ask the General Assembly for upgraded status short of full membership that could let them join international bodies.

Abbas’ statehood bid reflects a loss of faith after 20 years of failed peace talks sponsored by the United States and alarm at Israeli settlement expansion in occupied land Palestinians want for a state.

“This (settlement) policy will destroy the chances of achieving a two-state solution and … threatens to undermine the structure of the Palestinian National Authority and even end its existence,” Abbas declared.

It was the first time he has spoken so starkly of the PA’s possible demise, highlighting problems faced by a body set up as a state-in-waiting but now seen by its critics as little more than a big municipality, managing the civilian affairs of the main Palestinian cities under Israeli occupation.

Dissolution of the PA would throw responsibility for ruling all of the West Bank back to Israel as the occupying power.

Israeli and U.S. politicians have threatened aid cuts that could cripple the PA, the source of 150,000 jobs.

Israeli delegates stayed in the hall during Abbas’ speech, which was punctuated by applause, especially when he recalled his predecessor Yasser Arafat’s 1974 admonition to the United Nations: “Do not let the olive branch
fall from my hand.”

In the West Bank, flags and portraits of Abbas and Arafat, draped buildings in a Ramallah square where Palestinians watched a live broadcast of Abbas’ speech.

“We have come to take part with our people in asking for our rights,” said Mohammed Hamidat, 40. “With the current closed horizons, it’s the only thing we can do, even if the result is failure. It’s been years since we have seen anything new: this is a first step.”

Israeli settler Meir Bartler, 25, said: “We don’t care what they’re up to at the UN We have the bible, which says the land of Israel belongs to the Jewish people.”

A gulf of mistrust separates Israelis and Palestinians, who each feel their existence is at stake in a bitter struggle over borders, security, refugees and Jerusalem.

Political rifts among Palestinians, and the constraints of U.S. domestic politics, where support for Israel is strong, further complicate efforts to bridge the gaps.

Abbas spokesman Nabil Abu Rdaineh said the Quartet proposal would be discussed in Ramallah but indicated there could be no compromise on the core issues of the 1967 borders and Jewish settlement construction. 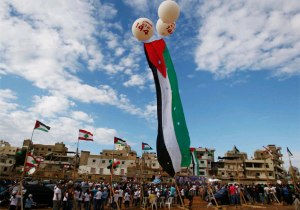 The divisions are rooted in a heavy burden of history, painfully contested narratives and recurring bloodshed.

The United Nations partitioned Palestine in 1947, but Arab states rejected that and declared war on the new state of Israel, which then captured more territory than it had been allotted under the UN plan and dispossessed hundreds of thousands of Palestinians, who became refugees.

Two decades after Israel seized the West Bank, including East Jerusalem, and the Gaza Strip in the 1967 Middle East war, which it launched fearing Arab states were about to attack it, the Palestine Liberation Organization recognized Israel and reduced its demands to a state on those territories.

In 1993, PLO leader Arafat and Israeli Prime Minister Yitzhak Rabin shook hands at the White House on a plan for Palestinian self-rule, which was never fully implemented.

Israel has expanded its settlements in the West Bank, although it dismantled them in the Gaza Strip, now ruled by Hamas who refuse to recognize the Jewish state.

Abbas accepts that negotiations are still necessary, but argues statehood will put Palestinians on a more equal footing. Israel sees the UN bid as an attempt to destroy its own legitimacy.

Palestinian president Mahmud Abbas made history in his people’s long quest for statehood asking the UN to admit Palestine as a member state, stirring US and Israeli anger.